​THE LINCOLN EXEDRA
The Lincoln Exedra was erected to commemorate the fact that Abraham Lincoln stopped in Peekskill February 19, 1861, on his way to Washington for his first in-auguration and addressed the large gathering of over a thousand Peekskill people who had met to do him honor. He spoke from the platform of his special train. He was introduced by Hon. William Nelson, who had served with him as a member of Congress from Peekskill in 1847. The Exedra was erected on land presented to The Lincoln Society in Peekskill by John Smith, Jr., a veteran of the Civil War, and President of the Lincoln Society from 1917 to 1918. It was designed by Gilbert H. Anderson, Peekskill architect, and a painting of it as envisioned by his brother, Vic-tor C. Anderson, the artist. Antonio S. Renza built the foundation and Grenci & Ellis furnished the granite from their Mohegan granite quarry. The bronze portrait tablet of Lincoln was the work of the Tiffany Studios in New York City. The Exedra was erected during the summer of 1925 and dedicated with fitting ceremonies on October 6, 1925. It cost $6100.85 and the work of raising the money, initiating and completing the project was done by the President of the Lincoln Society in Peekskill from 1925-1926, Chester A. Smith. The work of planning for it and finally complet-ing the payments for its erection occupied eight and one-half years. 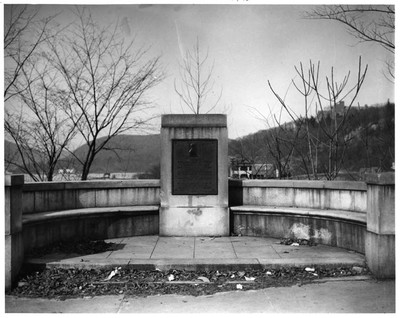 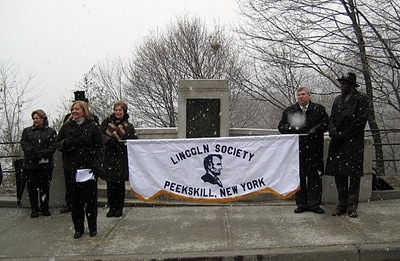